FOOD FIGHT IN ITALY IS THE REAL DEAL 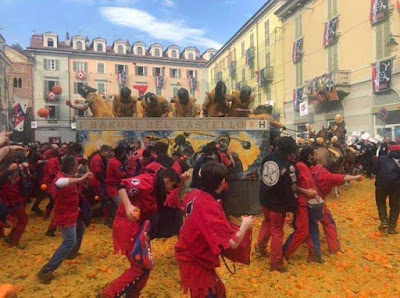 
Thousands of people in #Ivrea in #NorthernItaly began the #BattleofOranges, an annual carnival commemorating a revolution that led to the ouster of an #Italian baron.

It's a food fight of epic proportions as Ivrea, Italy holds its annual #BattleofOranges


Ivrea's orange festival is well-known to the locals, but not so much to the rest of the world.


It is #Carnevale in #Italia and the Battle of the Oranges is on in Ivrea, Italy.

Early on in the Battle of the Oranges today in Ivrea, Italy! My first carnevale.

Views courtesy of my cousin from the balcony of her law office! Later on, down on the streets! - Excited Participant.
Posted by TheSage at Friday, March 15, 2019